Out location has changed many times – according to Google.

As has Heery Agri and ATVs, Tunnyduff National School, even Black’s Butchers and Deli has apparently moved according to Google’s map!

I have no idea why this seems to happen on a regular basis. Blacks is between the Bailie Hotel and the post Office. On Google’s current map, it seems to show between Anne Street and SuperValu – at least on  the Google map I can display on my website…. 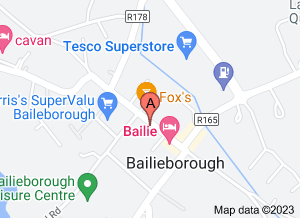 Our location in Bailieborough

Heery’s is not on the Main Street, at all. Boyle Sports might also like to have a look at their Bailieborough location. Bailieborough is the Twilight Zone for Google Maps apparently?

If you were to look at the Bailieborough Post Office, directly at it, you would see a door to the right hand side on the wall perpendicular to their front door. That is us! Despite Google’s best intentions, requiring three or more updates to set them back to correct, we are still there! But perhaps not on “their” map which I can display?

Got to contact Goggle again, now they seem to be zooming my map Grousehall, which might be fine, if I wanted to find my way home…though that may be my personal details – Chrome shows different versions compared to Edge, IE and Firefox.

Still there are soo many errors on this tiny map.

For us, look at the Post Office, look right, and THAT IS US!!

PS There is a door handle that you need to depress to enter – this seems to catch out many clients, for some reason…?

Last maps I looked at had Black’s somewhere between Anne Street and Supervalu, but the latest map I am viewing, in Firefox, has no Blacks at all!

And no Nico’s, which was there previously…

Must ask Niamh Smyth, our local “fixer”, not that even Niamh could take on the might of Google!

A change of plan – reopening Tuesday!

This site uses Akismet to reduce spam. Learn how your comment data is processed.

Local eyecare for all the family